Posted on 18th November 2014 by stabernethy

‘What were the objections to the Bill? One was that there existed no necessity for legislation on this subject, and another was that if a means of communication between passengers and guards were established they would have old women travelling by rail needlessly interfering with it.’

‘There had been a notice in The Times some time ago of a gentleman having his head cut off by a post when leaning out of the carriage window in endeavouring to attract the attention of the guard. The Times of that morning also contained a letter from a gentleman who had unsuccessfully tried to communicate with the guard, the carriage in which he was being on fire. Thus, it could not be disputed that a case of necessity for communication between the passengers and the guard had been established.’ – Henry Sheridan, M.P., 1867.

From the earliest days on the railways there was a serious communication problem. Until the end of the nineteenth century carriages were usually made up of separate compartments with no internal connection. This meant it was impossible, save getting out of the carriage itself, to escape from an emergency. Furthermore, until 1868 there was no legal obligation for a railway company to provide a means of communication for passengers to raise the alarm. Advice on the matter included waving a handkerchief on a stick out of the carriage window and hoping the driver or guard noticed. Where passengers might find a supply of sticks was never adequately explained. Other companies provided contraptions of dubious usefulness. One M.P. recalled

‘…that he found himself once in a carriage with one other passenger, whose conduct, after a time, began to excite his apprehension. He seemed very uneasy, looked out, listened, and stretched out of the window till his informant thought he was going to throw himself out, and came to the conclusion that he was shut up with a madman. His uneasiness increased when his fellow traveller, after leaning out further than ever, turned to him and said, “Have you any objection, Sir, to take hold of my leg? “But he proceeded to explain that he was an engineer, and that from a sound he heard he thought something was wrong with the axle, and wished to get at the rope in order to stop the train, which, with the assistance of his companion, he did. He mentioned this to show that it was evident that such a contrivance could hardly be called effectual, especially with regard to the use of it by a lady.’

In 1864 the first murder was committed inside a railway carriage. Thomas Briggs, a banker, was robbed, beaten, and then hurled out of a carriage to his demise on the North London Railway. As might be expected there followed vociferous demands for some means of signalling an emergency in a compartment. In 1868 the Regulation of Railways Act obliged all companies to provide communication cords. In an emergency, a passenger merely had to pull the cord, alerting the guard and bringing the train to a stop. That should have been the end of the problems…

Australian soldiers waving farewell on a train in Brisbane in 1940, but, given the lack of photographic evidence, providing our closest idea to how Victorian passengers would have to raise the alarm if their train caught fire. (from wikipedia commons)

The problem with communication cords was they had to run the whole length of the train. As trains had an uncanny knack of going around curves, the cord had to have enough slack to stop it from snapping. The result was cords were often too slack, so a passenger under attack was liable to spend precious seconds lugging away seemingly unending lengths of cord while simultaneously being murdered, which was hardly ideal. In other cases the cords simply failed to work, having broken at some point along the train.

In 1899 a passenger travelling along the East Coast main line was alerted by a man in the neighbouring compartment that they had a problem. The toilet between their compartments had, for reasons unexplained, chosen to spontaneously burst into flames. Faced with the prospect of being killed by a flaming lavatory, our passenger pulled the nearest communication cord, only to find it had broken at both ends. Swiftly shifting to the other side of the carriage and pulling the other cord, he found exactly the same situation. He was thus confronted with two lengths of emergency cord, a burning toilet, and the prospect of half an hour before the next stop. With help from the other passengers in the adjoining compartment he tried to douse the flames using the only supply of water available; the toilet. Exhausting that supply as the train pulled into Grantham, the passengers fled their compartments just as the flames spread into them.

As the twentieth century dawned, however, the cords became increasingly reliable. However, the other problem was that people had a decided knack of pulling the cords in various kinds of spurious “emergencies”. In 1912 Captain Walter Evans, finding he’d boarded a train that didn’t stop at his station, and having ‘a most important appointment which he must keep’, pulled the communication cord and brought the express train to a halt. The Magistrate presiding at the subsequent trial decided this was not an adequate excuse. It remained, however, a recurring theme among the socially superior passengers needing to get to business engagements. In 1934 a Managing Director with ‘an important engagement at Retford’ pulled the emergency cord as the express he was on travelled at 60mph through the station before evading the guard and clambering out of the stopped train. He was prosecuted and fined. 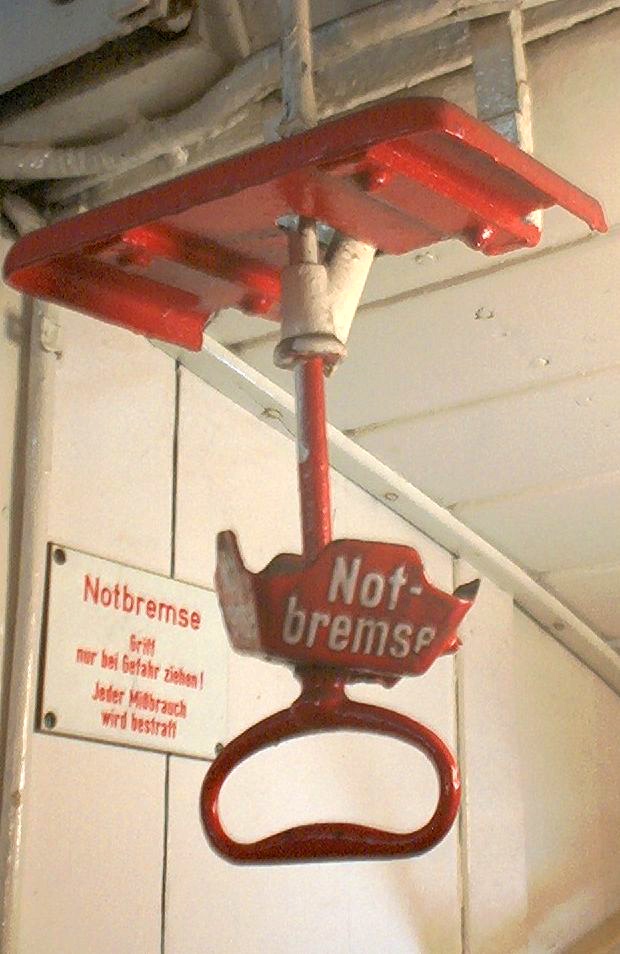 Other reasons, however, delved into the world of absurdity. In one case an elderly woman was leaning out of a carriage window while waving good-bye to her friends on the platform. As the train pulled away she started shouting “good-bye” louder and louder until her false teeth fell out of her mouth. She pulled the cord so she could retrieve them. In another case a bride and bridegroom were just setting off on their honeymoon when the groom pulled the cord because, as a consequence of being showered in huge quantities of the stuff by their friends at the station, ‘the bride was choking with confetti’. In 1959 a young mother, realising she had left her baby on the platform by accident, pulled the cord in Paddington station and managed to delay a total of 21 trains for almost ten hours. One man apparently pulled the cord so he could complain about the quality of the lighting in his compartment, another because a young woman was smoking in a non-smoking compartment, and there was an incident where an elderly lady, on her first railway journey, pulled the chord to complain to a bewildered guard ‘tell the driver from me that he is going too fast’. The driver’s response, alas, history does not record.

But perhaps the most dubious use of the cords was by those who smelt a profit. In the 1930s the fine for improper use of the cord was £5, and using it was often referred to as “the £5 pull”. Perhaps the canniest passenger who pulled the cord was the man who did so for a bet. He paid his £5 fine, but won his £10 bet.